On 2nd December 2015, our Director, Sajda Mughal OBE, was awarded the Ultimate Humanitarian in the Cosmopolitan Ultimate Women Awards 2015! The award is given out every year based on a public voting system where Cosmopolitan readers vote for who they think has been the most inspiring woman in each different category. Sajda who was awarded an OBE last year is no stranger to others recognizing her humanitarian work but being recognised by a well-known women’s magazine such as Cosmopolitan read by millions of women across the world has been another great achievement in her working life. 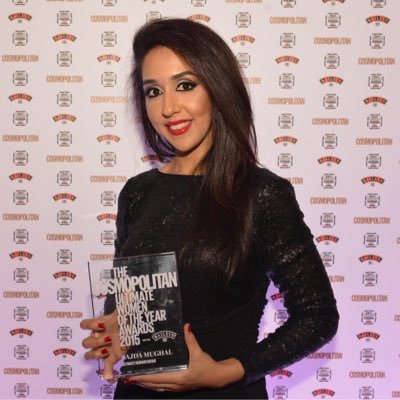 It all started when Sajda was a victim of the 7/7 bombings in London more than ten years ago. Having survived the bombings, she knew that Islam did not condone violence and what happened on 7/7. She started to face and witness a rise in Islamophobic comments and hate crimes and so she turned her back on her private sector career to join JAN Trust. Although JAN Trust was already an established charity, Sajda expanded the area of work and began programmes such as Web Guardians™, which teaches Muslim mothers technical skills so that they may protect their children from the dangers online, one of them being online radicalisation. Sajda states that she found out more than 93% of Muslim mothers barely know how to turn on a computer so she says “What better place to start than with the mothers who can protect their children? … So giving them the education and confidence means they can protect their children from extremist content found online. They’re the ones who can make that difference.”

Sajda and her team also travel to schools across London and the UK to deliver workshops on extremism and how children can protect themselves from the dangers of online manipulators. A lot of the children she works with have been incredibly inspired by her work, with one of the student participants tweeting just last week “You guys are amazing we did a workshop of yours at school and I was so inspired to do something.”

Additionally, Sajda has continued JAN Trust’s work against forced marriages in which she works with families and victims of forced marriage. JAN Trust is the only charity in the UK to be working with perpetrators of forced marriages in order to change mind sets of this cultural practice.. She claims that although it is a slow process “The only way of getting rid of this practice is to change those mindsets, otherwise we will be chasing our tail. We’d be supporting victims and looking after them, but continually having more victims — year on year, day by day. Why do these victims exist? Because of mindsets that need changing. It’s not going to happen overnight but it’s a drip, drip effect. Eventually we’ll get there.”

Sajda has been inspirational with her passion towards her work, which has helped thousands of women and young people across the UK so this much-deserved award is welcomed. There is still so much to be done, JAN Trust desperately needs funding to keep the organisation sustainable so that it can continue to carry out its vital work for vulnerable women and families. But as the team behind her at JAN Trust we are incredibly proud of her! Well done Sajda!