The Media STILL fails to report on far-right terrorism adequately

The language the mainstream media have used to frame the actions, arrest and trial of terrorist Darren Osborne has not gone far enough to adequately represent the severity of the danger of far-right terrorism. Until the media linguistically frames far-right extremism with the same conviction they are able to with Islamic extremism, society will be in the dark about the truth of this rising threat.

The news of terrorist Darren Osborne’s trial and subsequent jail sentence of a minimum of 43 years has been the focus of countless media headlines in the last few weeks. In the build up to the Finsbury Park terrorist attack, where he used a vehicle as a weapon to kill Muslim worshippers outside a Mosque, it has been reported that he obsessively consumed various far-right online materials. The startling facts relating to the case have emerged during the course of this trial where we have learnt that he was radicalised online in only a matter of weeks; this process of radicalisation allegedly set into motion by watching adocumentary about the Rochdale grooming gangs.

Osbornes’ search results indicated frequent visits to far-right sites and social media accounts such as the EDL and Britain First. His hatred of, and desire to kill Muslims was also enflamed by the personal videos and writings of ex EDL leader Tommy Robinson and the leaders of Britain First Jayda Fransen and Paul Golding. It is important to note that this consumption of far-right ideology is reminiscent of the terrorist Thomas Mair, who murdered MP Jo Cox in 2016. It was reported he shouted ‘Britain First’  just before the attack, had links to various far-right groups and collected Nazi memorabilia.

The government’s Prevent strategy now recognises far-right extremism as a significant terrorist threat and out of all individuals who were monitored throughout 2016/2017, almost one-third were reported to have extreme right-wing views. This is a rise of 25%from the previous year and is growing rapidly aided by the anti-Islam rhetoric we can see in the media and wider society.

In light of this, it is imperative that the danger of this terrorist threat is recognised as such and utilising the proper language to report on it and speak about it is vital. As we can see from some of the newspaper headlines below, there is a continued and ubiquitous use of phrases such as ‘lone wolf attacker’, ‘loner’, ‘Muslim attacker’, ‘Van Attack’ ‘Driver’, ‘Man who wanted to kill Muslims’ and ‘Finsbury Park Van Attack’. 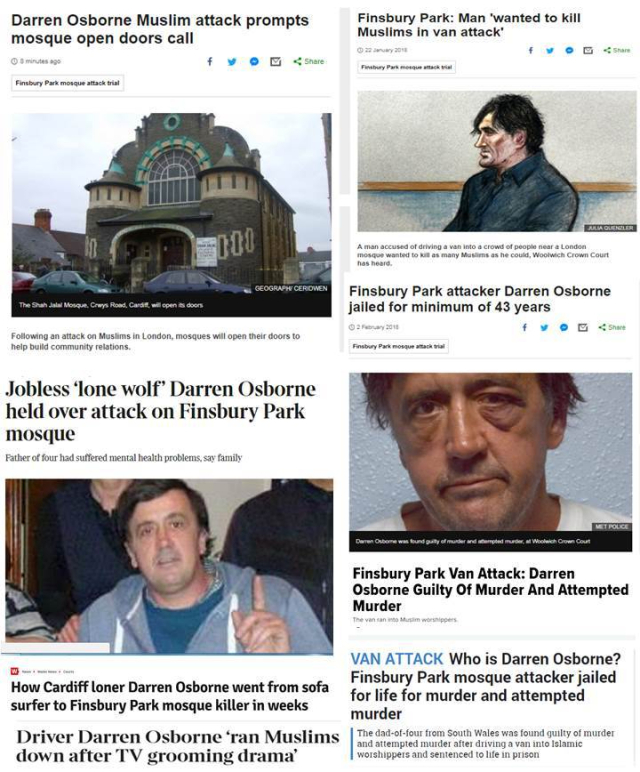 The language we use, shapes the meaning of how we perceive and understand the world. If the media, which has the power to exert huge amounts of influence, keeps omitting words such as ‘terrorist’, ‘terrorist attack’ and ‘far-right extremist’ from their headlines and discourse, the general public are not going to conceptualise this type of terrorist threat.

Labelling a terrorist as a ‘Driver’ or something along the lines of ‘Finsbury Park Mosque attacker who drove a van’ reads like the mainstream media is playing an odd game of linguistic gymnastics – the word ‘terrorist’ should be applied and not skirted around. In addition, labelling these terrorists as ‘lone wolves’ completely neglects their tangible links to far-right groups and networks. This type of reporting is doing a disservice to wider society by framing terrorists such as Darren Osborne and Thomas Mair as troubled, lonely, sick men who commit isolated one-off acts of violence. In actuality, these terrorists do not emerge from a vacuum, but from the membership and consumption of dangerous far-right ideologies and elaborate networks of online extremism; this is the common denominator for these extremists – they are not alone.

The way this case has been reported has proved that the same well-worn beating around the bush is still being deployed when the media has to grapple with a white male far-right terrorist. This is the same mainstream media which has no qualms labelling Islamic extremists as terrorists, so the reluctance to do so when it comes to far-right extremism is a problem rooted in a larger conversation of the stereotypes associated with what society thinks of as a ‘terrorist’.

At JAN Trust, we recognise that there have been improvements in this type of reporting over the last few years, however now there is no excuse for not correctly labelling this threat. The media needs to use the appropriate language to discuss far-right extremism and stop linguistically skirting around the issue in order to contribute to an appropriate understanding of the many ways in which extremism can manifest.

Our Web Guardians™ programme tackles the problem of online extremism from both Islamic and far-right angles and continues to successfully pioneer ways in which online radicalisation can be recognised and prevented.

To find out more about the work we do on this issue visit our Web Guardians™ website here: http://webguardians.org/