Deaths of NHS staff are disproportionately those from BAME backgrounds

The UK proudly houses some of the highest numbers of foreign-born doctors and nurses working for our NHS. According to a parliamentary report from July 2019, around 13.1% of NHS staff are non-British, the nationalities of these staff are wide-ranging with up to 200 nationalities being included. 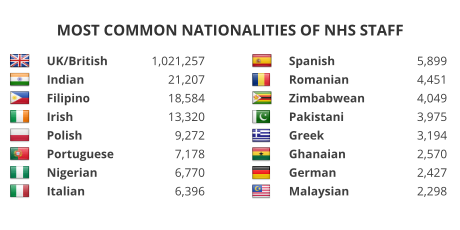 As a result of the COVID 19 crisis, the UK government is being urged to further investigate the disproportionate number of deaths of medical professionals and key workers from BAME backgrounds. With statistics proving BAME individuals  four times as likely to die from coronavirus as their white counterparts with official UK figures confirming the death of 109 BAME front-line health staff who have now died of coronavirus.

The lack of sufficient PPE equipment and clothing for those on the NHS frontline has been widely reported with Downing Street accused of failing to handle the pandemic or equipping hospital staff sufficiently or safely. This has partially been a result of the healthcare cuts and creeping privatisation the NHS has fallen victim to over the last decade. As well as this, the failure to risk assess employees who are already vulnerable due to age and underlying health conditions has resulted in the avoidable extra risk of continued work on the frontline.

The virus has previously been referred to as ‘non-discriminating’ in its severity of impact for those whom it infects. This has been proven to not be entirely true as figures have shown higher death rates in BAME communities with BAME patients up to 17% more likely to die. With a large proportion of key workers on the frontline being from BAME backgrounds, this requires drastic attention.

During a time like this, it is important to remember and mourn all who have lost their lives in the fight against this pandemic. We can only hope that further investigation will allow us to analyse the root failures and help stop this from happening again in the future.

Read JAN Trust’s blog post from March on the increased risk of infection BAME families face as a result of multigenerational living allowing the virus to transmit to vulnerable members of the family at home.

Also, check out this video and poem ‘You clap for me now’ by Sachini Imbuldeniya, which highlights and calls for an end to the discriminatory abuse experienced by thousands of BAME individuals at work, whilst simultaneously highlighting the key roles migrant workers play in our NHS.