Nearly two weeks ago, mayors in about 30 French coastal resorts decided to impose a ban on the burkini (A burkini is a type of swimming costume that some Muslim women wear, which covers the arms, legs and hair). The ban prohibited women from wearing a burkini on public beaches or in the sea. If the ban was violated, a fine would have to be paid. Mayor Villeneuve-Loubet argued that in light of the recent attack on Nice it was ‘necessary, appropriate and proportionate’ to implement the ban in order to prevent public disorder. A French NGO, Human Rights League, and the Collective against Islamophobia in France challenged the ban arguing that the mayors had no right telling women what they can and cannot wear on beaches. They were successful and last week the burkini ban was overturned by France’s top court which ruled that the ban ‘violates basic freedoms.’ However, the mayors are refusing to lift the ban. The ban was also condemned by the UN who described it as “a grave and illegal breach of fundamental freedoms” and a “stupid reaction” to recent extremist attacks. 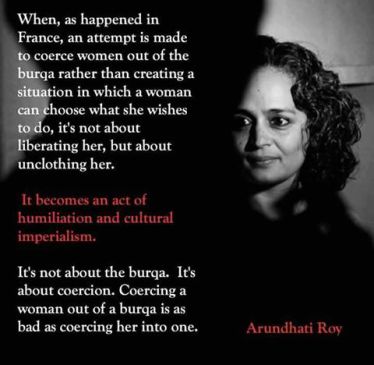 Within the French cabinet, most supported the ban but there was some disagreement over it. The French Prime Minister Manuel Valls stated that, “For me the burkini is a symbol of the enslavement of women.” Both the Education Minister and the Health Minister, Marisol Touraine, spoke out against the ban. The former said that the debate was fuelling racist rhetoric whilst the latter wrote on her website that “To pretend that swimming veiled or bathing on a beach dressed is in itself threatening to public order and the values of the Republic is to forget that those (secular) values are meant to allow each person to safeguard their identity.”

The burkini ban reached its climax last week when a photo was published of a Muslim woman on a beach in France surrounded by armed Police officers who made her take off her burkini. This sparked widespread furore which led to a protest against the ban outside of the French embassy in London in the form of a beach party. Despite being organised last-minute the protest received a lot of attention. Women in the city came together to show their solidarity with French Muslim women. The Mayor of London even spoke out against the ban telling the Evening Standard newspaper that “I’m quite firm on this. I don’t think anyone should tell women what they can and can’t wear. Full stop. It’s as simple as that”.

Mayor Villeneuve-Loubet’s claim that there is a security threat from women who show their religious affiliation is untrue. It is utterly absurd to link a piece of clothing with terrorism and in fact it is irresponsible to do so. The burkini ban is anecdotal of France’s rampant Islamophobia particularly against visibly Muslim women and follows the country’s ban on wearing the veil. There has been a wave of conservatism sweeping Europe and the rest of the world. In Germany, Chancellor Angela Merkel’s conservatives are calling for a partial ban on the niqab, whilst in Austria right-wing politicians have called for a ban on the burqa. In Switzerland there are calls for a popular vote on a ban on the burqa. Civil liberties are being curtailed on the pretext of national security which is very worrying.

State-sponsored Islamophobia is weakening community cohesion and has the potential to sow the seeds for conflict and hatred. The argument that the burkini is oppressive is offensive and ignores the fact that many women choose to wear the swimsuit because it allows them to go to a public beach or pool and swim and feel comfortable whilst doing so. It encourages social integration and can help overcome certain communities from being socially excluded. In the UK, many leisure centres hold women’s only swimming sessions where women of no faith and women of faith can swim. For many women from faith communities this enables them to undertake a healthy activity.

JAN Trust has done a lot of work on fostering community cohesion. Our experience of working on community engagement and community cohesion, as a charitable organisation, includes the delivery of training, projects and services aimed at socially and economically empowering women. For example, through our City and Guilds Fashion course and our IT for Beginners course we are not only skilling women but helping them to acquire the knowledge and tools to enter today’s challenging workforce. At the same time we are also promoting the enhancement of women as active members of society. Through our training, projects and services we are enabling independence and resilience by building the skills, resources and capacities of the BAMER community. Many of our women have gone on to become employed, self-employed or started volunteering.

We have also delivered a number of workshops across the country encouraging civic awareness amongst grassroots communities. In 2008, JAN trust organised Haringey’s first community cohesion conference called ‘One Community Many Voices’ (2008). The conference gave members of the public, in particular BAMER women, the opportunity to question the leader of the Council, their local Member of Parliament, the relevant portfolio holder for Communities and the local Police force.