Attitudes towards asylum seekers and refugees have long been hardening across the UK and Europe more widely.  In a climate of financial insecurity and social unrest, anti-immigration parties have been gaining popular support which has stiffened the resolve of mainstream politicians to tough talk on immigration.  Yet, lost behind alarmist posters telling voters 26 million foreigners want their job and stories of the failed £1.2 billion eBorders project, are real people in search of safety who, on entering the UK, are routinely treated like criminals, detained indefinitely without trial and face a policy of disbelief.

Imagine, after being imprisoned, tortured and raped for your political beliefs, you manage to escape to the UK.  You think you will be safe; the Medical Foundation sees your scars and supports your claim for asylum.  When your claim for asylum is refused, you realise it is not going to be as you thought.  You are arrested by the Home Office and sent to a detention centre.  This was the traumatic experience of Lydia Besong which, sadly, is not an isolated occurrence.  According to a report published in January by a charity catering for women refugees, over 28 000 individuals were held in immigration detention in 2012.  One third was held for over two months and others were detained for several months or years.  The UK is one of the only countries in Europe which puts no time limit on detention.  2000 of those detained were women.

Although the number of women seeking asylum are in the minority, many have experienced forms of violence or abuse, some of it sexual, and are particularly vulnerable. Women are continually detained by the UK in Yarl’s Wood Detention Centre which has been at the forefront of several controversies in recent years.  Not only does the process of detention deny people the right to liberty, it also has profound detrimental effects on the wellbeing of detainees.  For many, the experience is a second torture, as one woman describes, ‘when the big door closed it brought back everything that had happened to me back home when I was in prison.  I thought I was going to be raped.  The fear overtook me.’  The charity found that 70% of women felt uncomfortable being guarded by male staff, 50% had been verbally abused and 3 had been sexually assaulted.  Furthermore, in violation of the government’s own rules, torture victims and pregnant women are regularly detained while others are denied access to decent medical care and legal support.

The impact that detention has on detainee’s mental and physical health is significant.  Research suggests that asylum seekers globally experience high levels of pre-migration trauma and are susceptible to trauma related mental health problems.  Asylum seekers experience further stress relating to the detention process itself, including uncertainty regarding return to their country of origin, social isolation and abuse from detention centre staff.  Clinicians world-wide have called for an end to the process of detention due to the overwhelming evidence that suggests it increases mental health difficulties in asylum seekers. A study carried out in Yarl’s Wood Detention Centre found that 37% of women suffered from mental health issues including depression, psychosis, insomnia and flashbacks, to name a few, while 30% had been on suicide watch at some point during their detention and 22% had attempted suicide.  One woman described how ‘living is not worthwhile anymore, being dead would be better.’ ‘I have seen many people around me cutting themselves with broken glass and that has an effect on my mental health,’ said another.

It is no surprise that Yarl’s Wood Detention Centre is tucked out of sight and out of mind in a discreet corner of Bedfordshire.  How many of us want to be confronted by the knowledge that torture victims are routinely locked away for an indefinite period of time, or dragged on to a plane ‘in a night dress and no shoes,’ in our own country?  As Zadie Smith argues, ‘these things could only make a form of twisted sense if we, as a country, had come to see migration itself as a criminal offence. Is that really what we believe?’ 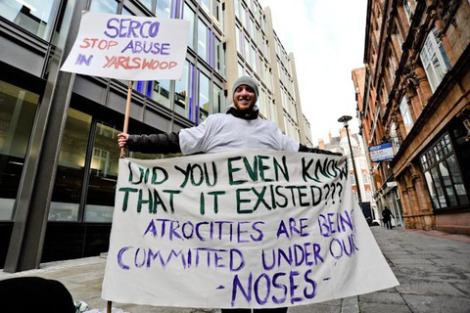 Although the Home Office argues that detention and removal are ‘essential parts of effective immigration controls’ and ‘it is vital these are carried out,’ their own statistics show that only 36% of women released from detention in 2012 were actually deported.  Detention is unnecessary and has an ongoing impact on the mental health of vulnerable women detainees.  It would be far less traumatic for asylum seekers and far more cost effective for the tax payer, if asylum seekers could live in the community while their cases are being considered.  At the very least, drastic reform of the detention process is sorely needed.

Here at JAN Trust, we aim to empower and provide services for refugee, minority and hard-to-reach communities to enable and encourage positive integration into society.  For more information on the work we do, please visit www.jantrust.org.