Why English is essential for integration into British society 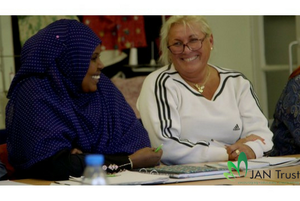 The English language, as the official language of Britain, is an essential skill for refugees and migrants to fully integrate into British society. The government will be releasing a new integration strategy this year.

Dame Louise Casey was commissioned by the government to review community cohesion at the end of 2016, in a report titled ‘The Casey Review’. The recommendations of this report were in fact based on a visit Dame Louise Casey made to our centre in 2015; the conclusions she came to were influenced by talking to us and meeting our beneficiaries and hearing about their experiences and needs.

There is a vital need for greater ESOL provision for minority communities, a recommendation which JAN Trust has been at the forefront of advocating for. At JAN Trust we have seen the positive effects of investing in language provision first hand, as a result of our free ESOL classes for marginalised women in the local area.

JAN Trust was formed in 1989, providing a range of classes for minority ethnic women and addressing the issues affecting them by creating a safe environment where service users can voice their concerns freely and openly. From its inception, JAN Trust has recognised that lack of language skills can lead to low self-confidence and isolation, and we have worked tirelessly to challenge this vicious cycle. This has resulted in scores of success stories. We have seen women evolve from isolated individuals with no confidence, to empowered women armed with qualifications, moving on to successful careers or further study. As one JAN Trust user commented:

“A big thank you to JAN Trust who has helped me gain new skills and confidence. They supported me in opening my own fashion business which is proving to be successful. JAN Trust has inspired me to continue with my business and support my family out of poverty.”

What is shocking, though, is that the UK budget for ESOL classes has been consistently cut in recent years. Overall ESOL funding has been slashed by almost 50% since 2009.

Over the past three decades, we have helped thousands of women to not only improve their English, but to regain their confidence and improve their job prospects, through skills classes. Women such as Sarla, originally from India, who said: “Before, I had no confidence to speak and write English but now I write and I’m using the computer as well. My daughter has bought me a small computer now.” Or Jurgita, originally from Lithuania, who took one of our tailoring courses and now says: “I would like to do something more with these new skills I have gained – maybe open my own business or get a job.”

Our classes not only enable women on a personal level to further their careers and gain skills. These classes also support social inclusion in a understanding atmosphere and create a sense of empowerment that can allows women to prevent domestic violence, forced marriage, FGM and radicalisation, all of which are among the government’s top priorities.

If you are interested in finding out more about the services we offer, visit http://jantrust.org/ 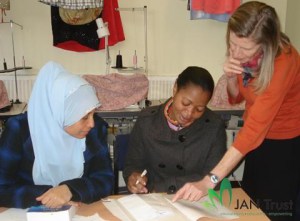